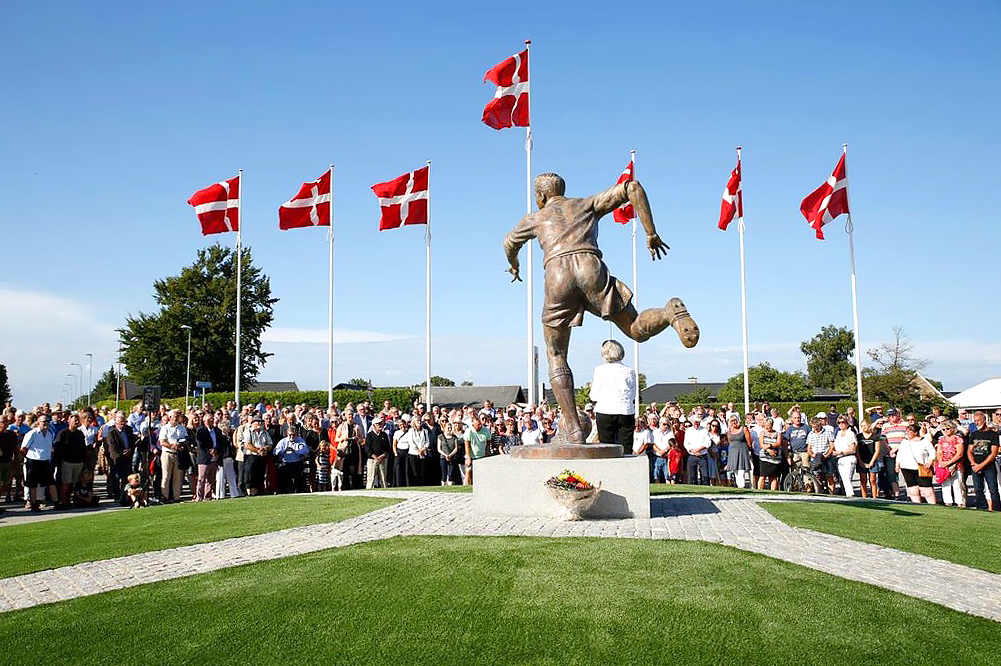 Last 9th of July a big bronze statue of the late danish football player Harald Ingemann Nielsen (1941-2015) was revealed by his wife Rudi Hansen (a well-known former Danish actress) and children in his hometown Frederikshavn. Our partner WGS Kunstgrasbæner took care of the installation of the artificial grass surroundings of the statue, using our natural looking landscaping grass in the Edel Grass ‘Lounge’ range.

‘Gold-Harald’ Nielsen was a very talented and famous football striker. He debuted in the Danish national team in 1959 at the age of 17 as the youngest player ever. In 1960 he won a silver medal at the Summer Olympics and became the tournament’s top scorer with 6 goals. He earned a transfer to Bologna in 1961 and became Serie A champion and league top scorer in 1963 and 1964. In Italy he was cold ‘il freddo Danese’ (Cold Dane).

In 1967 he became the most expensive player of all times when he transferred to Inter Milan for 820.000 (nowadays) euro. Unfortunately due to back injuries he never reached his high days again. After periods at SSC Napoli and UC Sampdoria he ended his career in 1970. Nielsen died in 2015.

With this statue one of the greatest players of Danish football is respectfully honoured and remembered. We’re proud to have him on our grass!