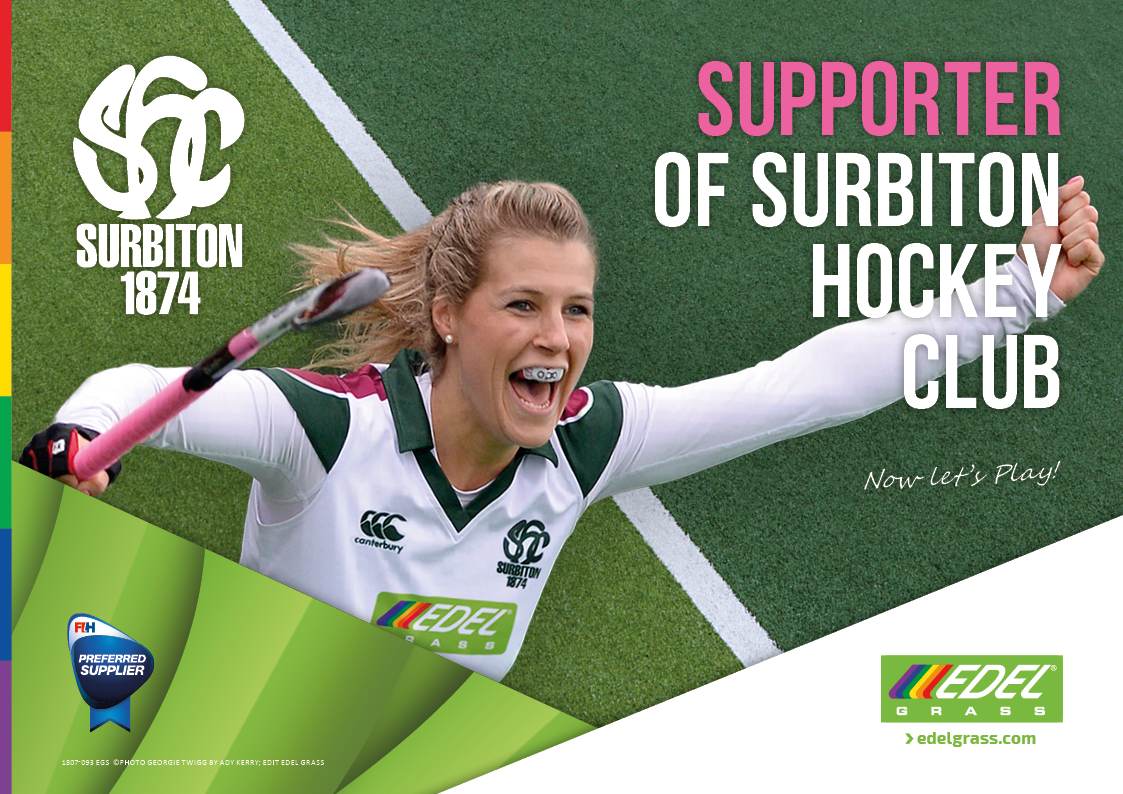 Since Edel Grass started as the shirt-sleeve sponsor for as well Ladies 1st as Men’s 1st team of Surbiton HC in 2014, many trophies and championships were brought home to Long Ditton. Whether or not these two facts have anything to do with each other, we do not dare to claim. What we do know for sure, is the fact that Edel Grass and Surbiton HC fit each other in many ways.

As a result of this relationship, last June Surbiton reached out to Edel in an effort to extend the partnership for the future, offering the grass producer the main sponsor position on the virgin white textile of Surbiton’s Ladies and Men’s first teams.

For Edel Grass field hockey in the UK offers great opportunity. The hockey landscape shows numerous autonomous and traditional clubs. Also field hockey has been popular at universities and schools for decades. Beside that hockey is still gaining popularity stimulated by the focus on health in which sport plays a key role.

In 2015 Edel Grass introduced the Edel ID field system for hockey, developed by engineers based on input given by several professional parties, hockey players and federations. Since the introduction reviews around the world were overwhelming. With Edel ID the status of Edel Grass as a leading supplier for premium quality hockey fields was confirmed once more.

To be able to accelerate artificial turf projects in the UK hockey market, Edel Grass very much believes in positive collaborations with leading partners alike using the ‘support travels both ways’ principal. And we believe Surbiton feels the same.

Having that said, we couldn’t be more proud to announce the renewal of our partnership with Surbiton HC. During the season 2018/2019 Edel Grass will be the main shirt sponsor for Ladies 1. Both parties agreed and intend to extend the partnership for 2 more seasons at positive results.

Surbiton HC, established in 1874 is one of the oldest hockey clubs in the world. The club is based in Long Ditton, Surrey, England. Surbiton Ladies 1st team won the Investec Women’s Hockey League Premier Division for the last 5 years and their Men’s 1st won the last 2 titles in the Men’s Hockey League Premier Division. These price winning squads make Surbiton HC the leading hockey club in England.

Our customer support will handle and follow up within the next 24 hours.

We’ll deliver your requested document as soon as possible!