The mutual
benefits of
Club Support 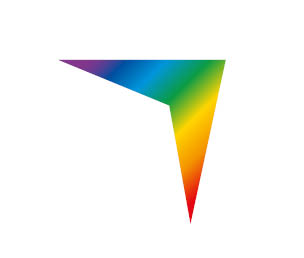 Proud supporter of the sports!

Edel Grass is a big supporter of national and international sports clubs. For years, we’ve been collaborating with local and professional clubs to optimize the playing characteristics of our innovative sports systems. We’re proud to be affiliated with our partners!

“Connecting is our greatest asset. The involvement of our partners makes it possible to continue to innovate, to develop talents, to play hockey at the highest level, and to continue to play an important social role within the community. The quality of Edel Grass fits in seamlessly with what we as a club stand for. In our view, this common pursuit of quality is the basis for a great partnership.” 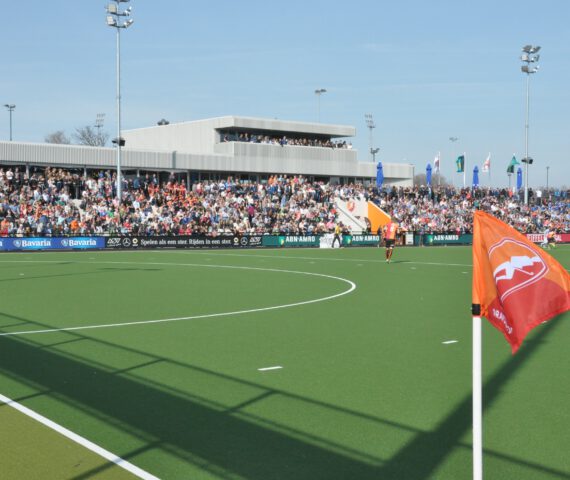 Being co-sponsor of HC Bloemendaal is one of our greatest prides. HC Bloemendaal was founded back in 1895, when hockey was an all-men sport. Today, the club has a premier status in The Netherlands and enjoys fame around the globe. Both the 1st Men and Ladies teams play in the highest leagues of the Netherlands. The club solely plays on Edel Grass pitches and in 2019, the 1st Men team won the Dutch championship on our system. Club manager Ronald Duijtshoff stated:

“Partnerships are about mutual interest. In our collaboration, this includes sharing the knowledge and experience of our national and international top hockey players in the development of high-quality artificial hockey pitches.” 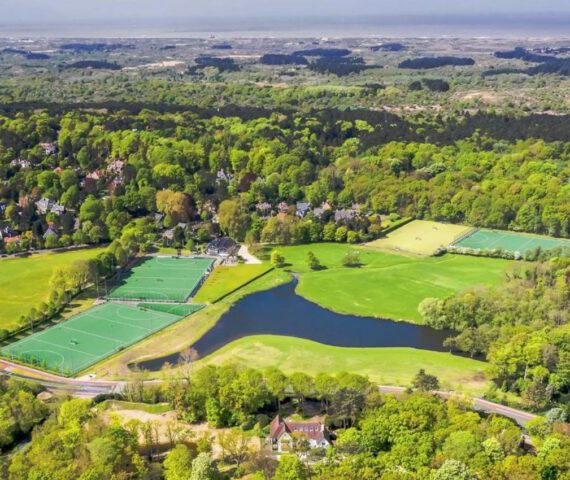 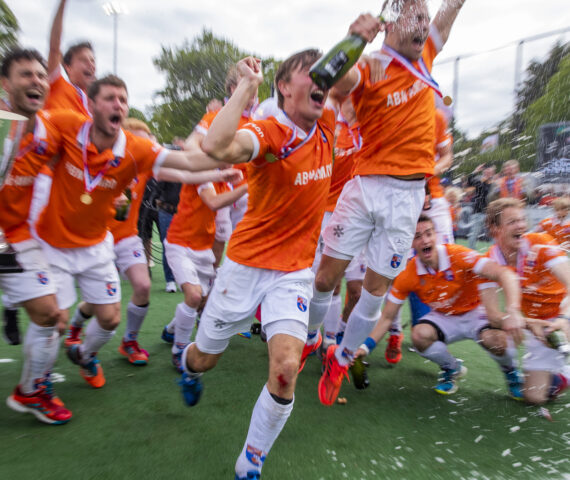 Even though Sportclub (SC) Genemuiden existed before 1930, this is the year the club was officially founded. Edel Grass has a special connection to the club, since we’re situated in Genemuiden as well and have always been sponsoring clubs and teams one way or another. Together we have a long history and partnership in the sport we both love: football! This is also the reason why we connected our name and support to their yearly organized Edel Grass U14 Talent Tournament, where youngster teams from 1st league clubs and some foreign teams take it on to win the tournament cup. SC Genemuiden enjoys two of our Edel Grass soccer systems. Entrepreneur and chairman of business club De Wetering Raymond van Dijk defines our partnership as follows:

“If you understand quality, you will know Edel Grass for their artificial turf products. Craftmanship, precision, and loyalty are the fundament for a longterm partnership to create a win-win situation.” 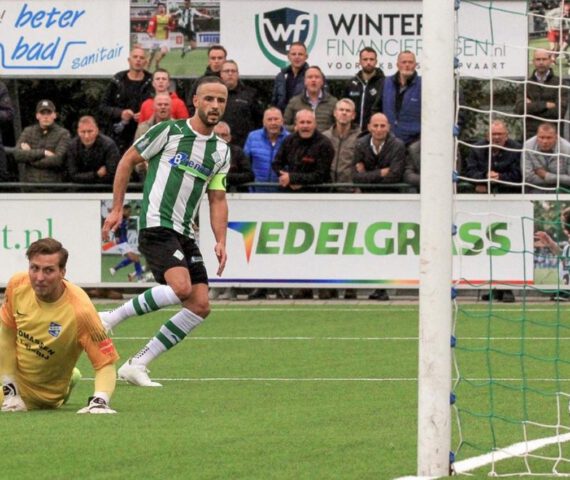 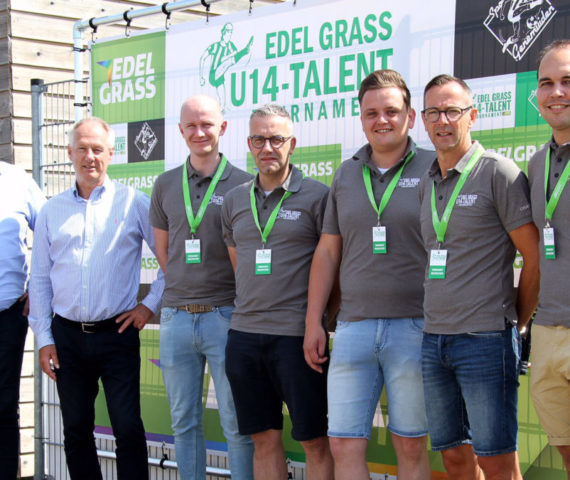 Surbiton HC was founded in 1874 and is one of the oldest and most respected English hockey clubs. The club has spawned several internationals over the years and the 1st Ladies team is even record holder of the UK championship. Edel Grass is proud to be the head sponsor of the SHC Ladies 1. Surbiton HC solely plays on Edel Grass systems!

Giselle Ansley is GB/England International and Olympic and European gold medal winner. For her achievements in hockey, she was appointed MBE in 2017. As player of Surbiton HC 1st Ladies team, she understands the importance and necessity of having reliable sponsors. In 2019, Giselle became Edel Grass ambassador in the FIH Pro League matches. On our partnership, she states:

“As title sponsor for Surbiton HC’s Ladies 1st, Edel Grass provides invaluable support to enable the team’s ongoing domestic success and our attempts to comete with Europe’s top clubs at the EHL. We are also lucky to train and play on one of the best hockey surfaces in the country. Thank you so much, Edel Grass!” 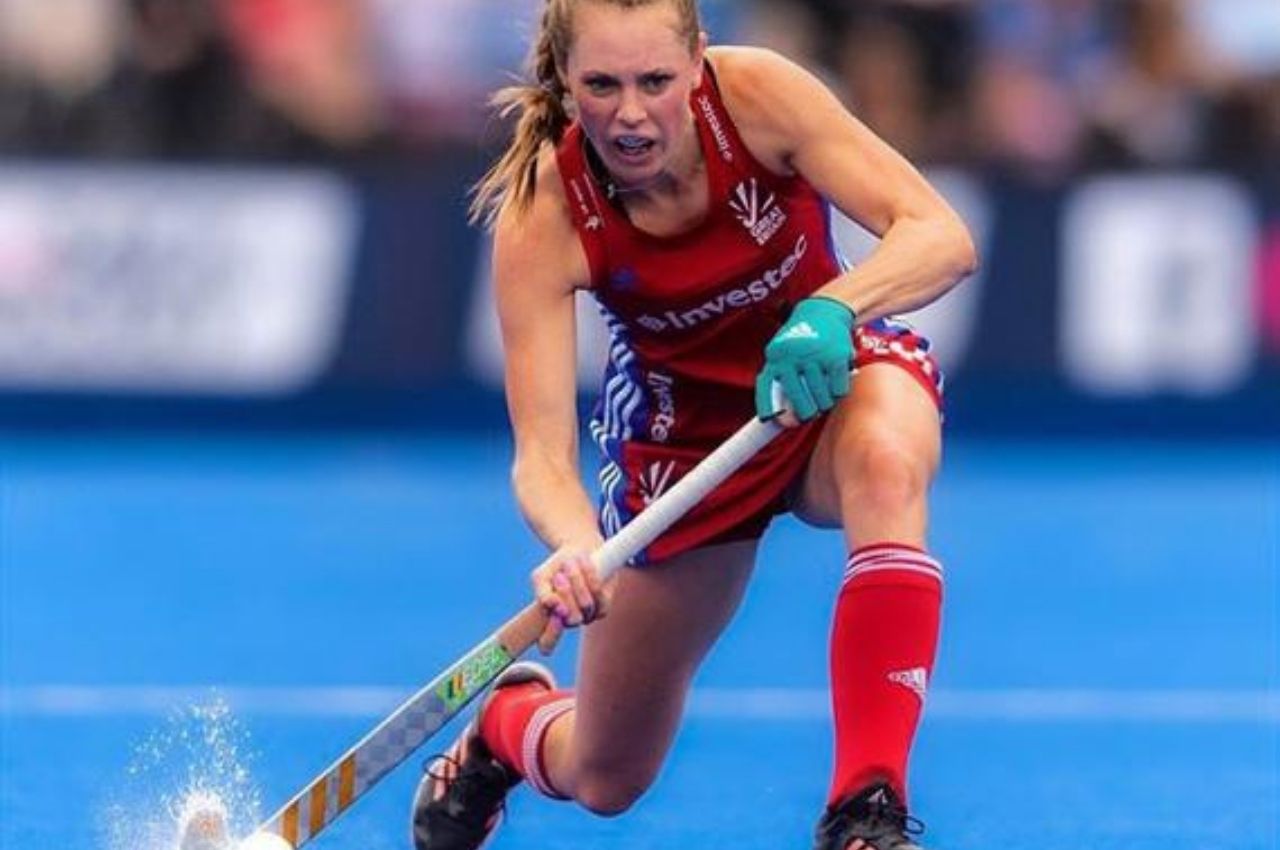 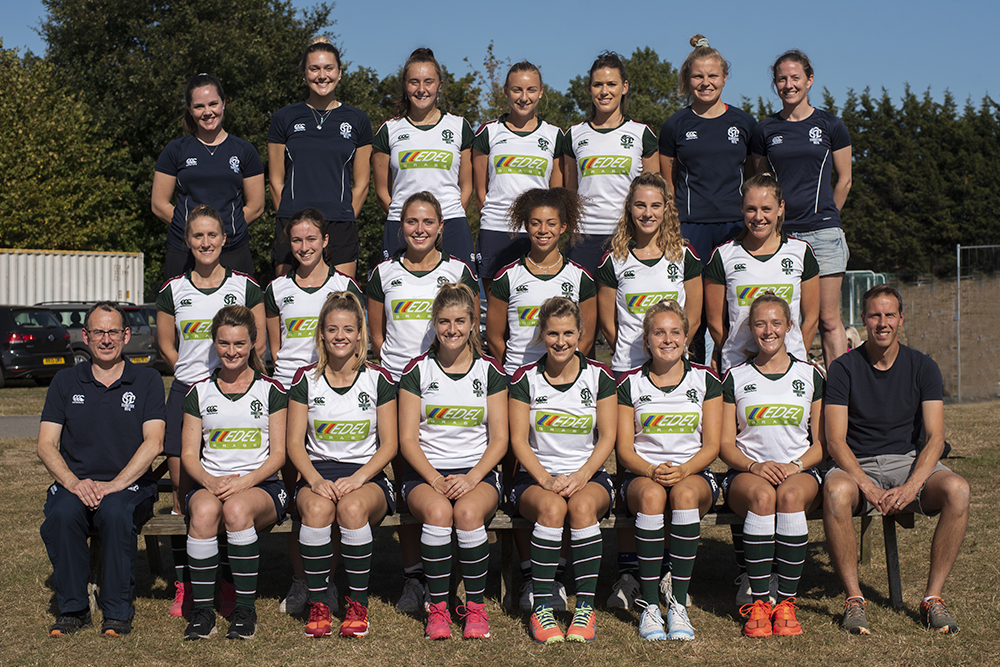 Edel Grass is sponsor of various soccer clubs in the township of Westland, Zuid-Holland. The township features around 15 prestigious Edel Grass Future DS 3G pitches, topped off with durable EPDM performance infill, extended over a number of soccer clubs. Mark Valstar is sports officer of Westland and is responsible for the construction of the soccer systems of the clubs. 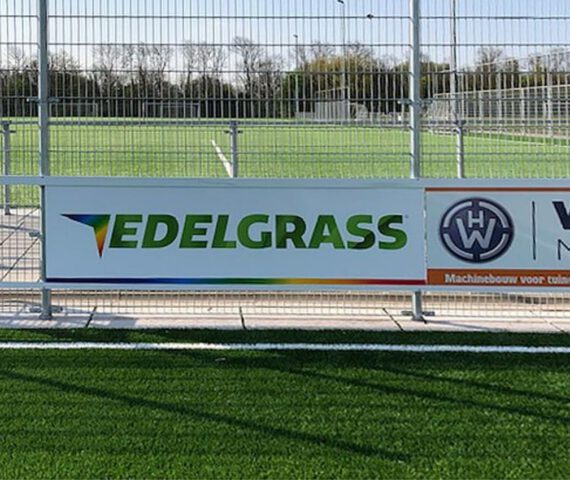 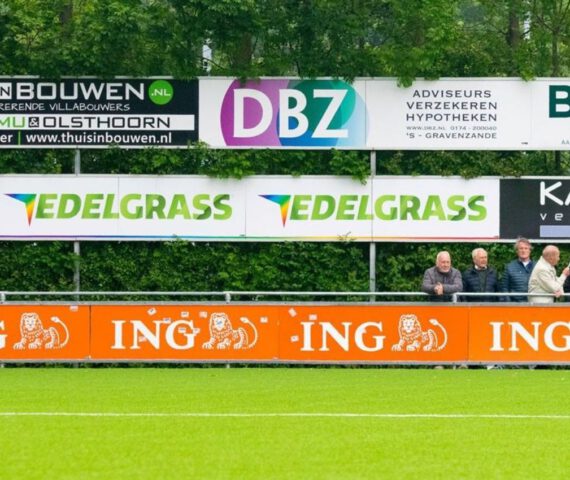 LMHC is a Dutch hockey club from Laren, Noord-Holland, and is well known for its contribution in delivering top hockey players for the best teams in the world. In 2014, the club reached the highest level for both the Men and Women teams. Gary Watson has been Groundsman of the club for over 10 years. He knows the Edel Grass systems like no other and knows what the players need to be at their best, at top level and recreational level. The club has various Edel Grass hockey fields and we’re boarding sponsor on the main and side fields of LMHC. 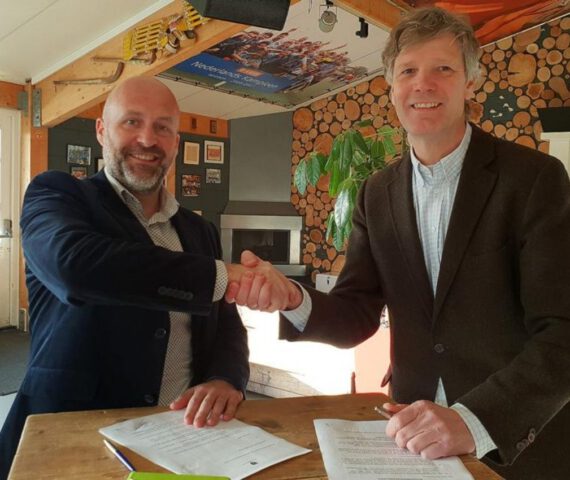 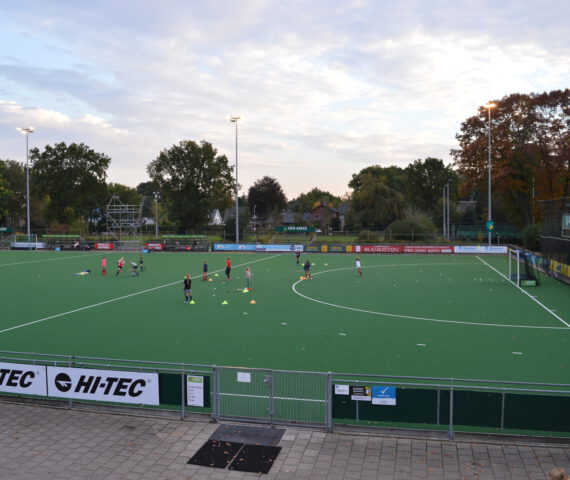 Edel Grass wants to promote sports in the broadest sense of the word by means of sponsorship. We also want to support athletes, associations and organizations in their efforts to deliver top performances. In addition, we want to make a contribution to social issues (for example, health and sustainability) through sponsorship and thus serve a wide audience. Edel Grass supports various projects and events, associations and institutions by supplying material, commercial agreements, advertisements and/or the personal commitment of our people.

We feel the need to have our sponsoring activities in compliance with our policy. This is why each of the following aspects are reflected in every agreement: a contribution to society, a positive and strong association with the brand Edel Grass, creating brand value by communication, recognition with every stakeholder and, last but not least, supplying a commercial value which leads to business opportunities.

“Through sponsoring, one is able to optimally position its brand. Taking in consideration that the sponsoring efforts appeal the right target groups and results in increased value for the organization in the broadest sense.” 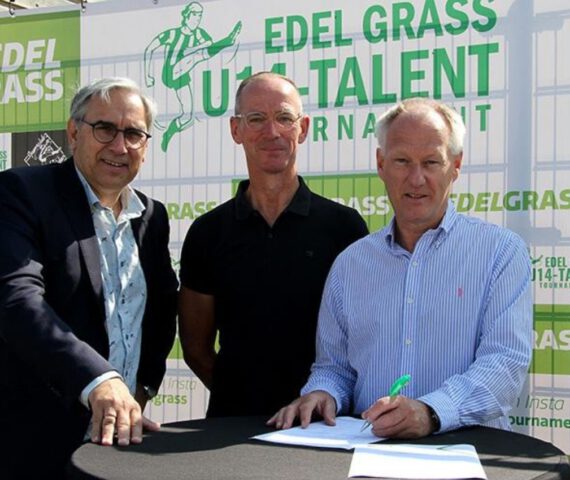 “For Edel Grass, support serves multiple objectives. Being able to carry out and build our brand name, supporting local society, creating a positive association with the Edel Grass brand and teaming up with parties to reach our commercial goals are leading in this.” 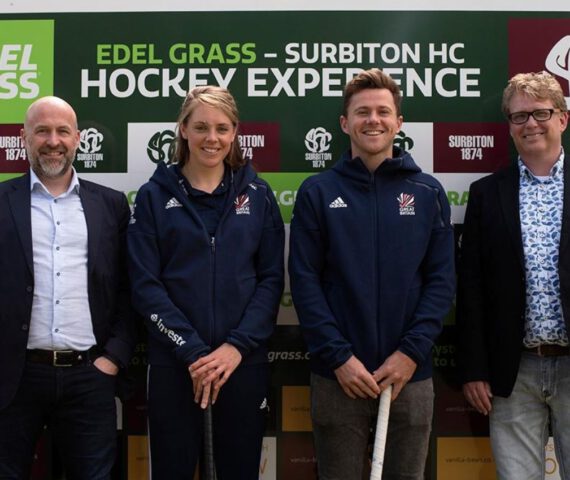 A field made to win
starts with Hi…

Do you want to examine our solutions in building or renovating
your sports field together with Edel Grass?
Just click here and start with hello.